The Unfortunate Link Between Mothers, Babies And Candida

So the baby is picking up too much candida and too little friendly bacteria, and as these multiple, candida overgrows. Right from the very start.

It used to be different.

Back in the Fifties and even the Sixties most of the time candida overgrowth developed because antibiotics were knocking out friendly bacteria, but not the candida in the intestinal flora. The friendly bacteria had been keeping in check the very small amount of candida yeast that is supposed to be in the intestinal flora. This candida is there to combat bad bacteria. It has a purpose but turns bad when it overgrows.

When antibiotics wiped out the friendly bacteria along with harmful bacteria, there were not enough friendly bacteria to keep the candida yeast in check. It overgrew and colonized much more of the intestines than it was ever meant to do.

Once this happens, and the candida overgrows so much that they get a little crowded, some decide to leave home.

To do so, they morph into a fungal form with tiny legs. By then, the intestinal wall has already been compromised with the candida toxins. The candida fungi use their legs to drill holes in the intestinal wall, escape into the bloodstream and spread throughout the body. They can live there, and usually do, for a lifetime.*

So it used to be that most of the people developing candida overgrowth were adults and children who had a least a few years, if not decades, of having healthy intestinal flora, a strong immune system, and an efficient detoxification system.

Because there has not been, until now, as you will read on this site, an effective way to deal with candida overgrowth, one that may eliminate the candida. So once candida overgrew, it stayed overgrown. Your whole life.*

The Unfortunate Consequences of Having Candida From Birth 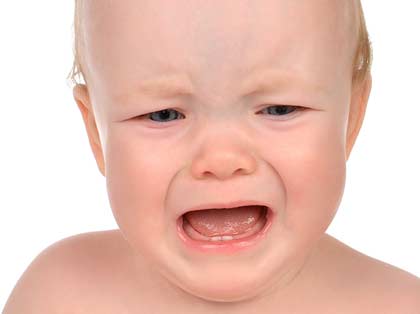 When a baby picks up too much candida and not enough good bacteria, it has a tough time of it from the start.

Ear infections and sinus infections may develop. Poor digestion too. Food allergies can develop because candida causes a leaky gut which allows partially digested food to enter the blood.

As your child grows, health issues often become worse. Chemical sensitive may develop because the detoxification system has broken down. Foggy head, fatigue, many bouts of the cold or flu. Asthma. We’ve talked with many parents whose children were in their 20s and doing very poorly.

Worse though, is the connection between candida overgrowth and autism.

These babies have a poorly functioning immune system and a detoxification system no longer able to remove toxins because it is used up and worn out by all the candida toxins, Because of this, an overload of toxins that other children not infected by candida may be able to handle, can’t be dealt with. The toxins get stuck in the body of these babies with candida, and these toxins disrupt brain function. This sets the stage for the development of autism.*

Candida may even be associated with the development of childhood leukemia, which may develop when candida colonizes in the bone marrow. The toxins candida releases disrupt blood and immune cell production in the bone marrow and can result in a diagnosis of leukemia.*

The Sooner You Start Battling Candida, The Faster The Results!*

Pay attention to the warning signs that your baby may have candida. Frequent ear infections, sinus infections, thrush, digestion problems, elimination issues and so on. If your child is too young to do the spit test described here, mom you do the test and also see how many symptoms you can relate to. If you have candida overgrowth, your child does too.

The sooner you get you child on CandXpel to deal with candida, the better it will be. It can be eliminated much faster in a one-year-old than in a ten-year-old. Your ten year old will respond faster then you will. Candida becomes more entrenched in the body the longer it lives there.*

Read in detail about both these elixirs on this site.

Get the Candida Double-Punch Combo for a saving on both CandXpel and Toxin Elimination Elixir when purchased together.

If your child craves carbohydrates, and you know you don’t want to battle getting them to eat a low carb candida diet, get Pentose Phosphate Pathway Elixir also. Its instructions may turn off carbohydrate metabolism in Candida.*

Do try to eat organic to minimize toxins, avoid foods your child is allergic to or that have mycotoxins in them, and to avoid iron fortified processed foods as that iron will feed pathogens.

Get the Candida Triple-Punch Combo for a savings on all three elixirs. CandXpel, Toxin Elimination Elixir and Pentose Phosphate Pathway Elixir.