How To Tell If You Have Candida

Use this test in conjunction with seeing how many candida overgrowth symptoms you have. A positive on the test (seeing anything in the water) along with identifying several symptoms that you have means you do have candida overgrowth. 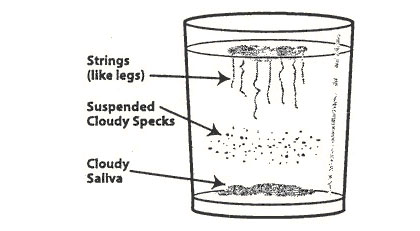 In the evening, put a clear glass of water by your bed. First thing in the morning, briefly rinse your mouth, swallow, then gather some saliva in your mouth and spit into the glass of water (be sure to spit out saliva, not mucus).

Keep an eye on the water for half an hour — especially the first few minutes. If you have candida overgrowth, you will see one or more of the following:

1. Strings (legs) hanging down from the saliva.
2. Heavy-looking saliva (anything at all) at the bottom of the glass.
3. Cloudy specks suspended in the water.

If within three minutes after spitting into the water, you see “strings” hanging down, “cloudy particles” showing up in the water, or “debris” sinking to the bottom, you most likely have an extensive overgrowth of candida, which may require more candida-fighting action on your part.

If it takes longer than a few minutes for anything to show up, the candida is not likely as extensive as it could be.

Important to know: If you see anything at all floating in the water (if the water is not clear), you do have Candida fungal overgrowth.

FYI: How Does The Candida Test Work?

The way the Candida Spit Test works is simple: If you have candida overgrowth, it will show up in the saliva, a friendly environment for yeast.

When you spit into the glass, the aerated saliva is lighter than water. However, candida is heavier than either. Whether it sinks as “legs”, falls to the bottom, or floats around in the water, all are indications of candida. The more you see, and the faster you see it, the more systemic the infection.

Candida concentrates in saliva overnight, so this test is the most accurate first thing in the morning. I suggest rinsing out your mouth first, because, if you happen to be sleeping in a room with mold, you may have mold in your mouth because you have been breathing it in, and this could show up in the saliva too.

Out of the thousands of times I’ve suggested that someone does the spit test, just to confirm that they had candida, only once did someone tell me that their test showed clear water, indicating that they did not have candida — however, it was apparent from all their symptoms that they had candida overgrowth. And among the many who tested positive that I’ve spoken with, ALL have had candida symptoms. Some people claim this Candida test is not accurate, but that has not been my experience.

I’ve heard more often, though still only rarely, from people who said their blood test or stool sample test was negative, even though they were clearly suffering, based on their symptoms and the spit test, from candida overgrowth. So this candida spit test is at least as accurate as expensive tests available from doctors.*